I’ve grown to dislike Twitter. My recent experiment on Twitter even made me dislike me for a little while.

I’d like to say it was the hack that did it to me. But it wasn’t. 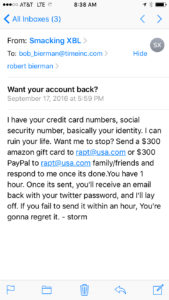 Granted, I did not enjoy getting an email from “Smacking XBL”, discovering my Twitter account had been hacked, the email deleted, cell phone deleted and password changed. Nor did I enjoy the four days of getting it sorted out while wondering what information the hacker had harvested from the dark recesses of my account. But that wasn’t what caused me to dislike Twitter and me.

I discover a lot of news on Twitter. It’s a great tool for that. Over the past year or so, however it’s gotten quite tedious. Maybe it’s the people I follow, but increasingly Twitter has become a journalist clique, back-patting each other, swapping inside jokes and treating each other like the cool kids while everyone else watches. Don’t get me wrong, I still discover a lot of news on Twitter. The tedious clique of cool kids (in their own minds), however wasn’t what did it either. It just made Twitter more boring.

Oddly, what did it was one of my Tweets that went sort of mini-viral. I clicked “reply” on a journalist friend’s Tweet and made a comment about the potential consequences of someone’s Twitter habits. I put my phone down and got back to what I was doing. A little later, my phone screen started flickering in a distracting way. Thinking something was wrong, I took a look — it was Twitter notifications. They kept going and going all day. I turned notifications off. The likes, replies and retweets continued for days. Currently the Tweet stands at 1,887 likes and 297 retweets. 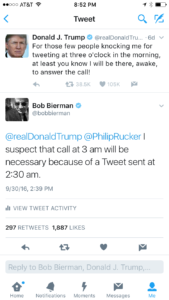 It was a little exciting. Occasionally, I get 30, 40, 50 interactions on a Tweet, but this was off the charts based on my history. I decided I needed to know why this happened. So I experimented. Was it Tweeting at a loudmouthed Presidential candidate? Nope. Tried a few of those. Nothing happened. Was it replying to that particular journo friend? Nope. Tried it with some other friends. Nope. Picked a few random celebs and tried it. Nope. Posted increasingly obnoxious Tweets. Nope. Posted snarky Tweets. Nope. Posted interesting Tweets.

No. I did not figure out the secret.

What DID happen? I looked at my Twitter feed and thought, “Ugh. What a waste of time.” There were snarky, stupid Tweets. Some were a little bit funny. Some were attempts to make a serious comment. They didn’t add up to anything useful. Didn’t contribute to the public dialogue. Didn’t inform anyone. Frankly, I didn’t care about the things on which I was commenting. Between us kids, I don’t feel a particular passion either way about the candidate whose handle was included in my original reply.

I didn’t like myself for caring about any of it. Or for wasting time and thought on all of that. Even though it was a brief experiment.

So help me out here. Why do we Tweet?